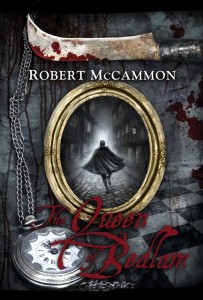 Subterranean Press has posted this announcement on their website:

Important Note: There is no exclusive order period for The Queen of Bedlam, which has a smaller print run than The Providence Rider and The River of Souls, but a larger one than Mister Slaughter. Catch all that? If you’re looking to match a number with Queen, please request it in the comments when you place your order. We expect this title to sell out quickly, so please don’t delay in ordering. There is no trade edition, and the limited will not be made available to our wholesale and large online retail accounts.

Matthew Corbett first appeared in 2002’s Speaks the Nightbird, the novel which signaled Robert McCammon’s return to fiction after a decade long absence. Five years later, in another significant event, Matthew reappeared in The Queen of Bedlam, a book that firmly established him as the central figure in the best historical adventure series going.

The Queen of Bedlam opens in 1702, some three years after the harrowing experiences of Speaks the Nightbird. Matthew is now living in the nascent metropolis of New York City and has found unsatisfying employment as a poorly paid clerk to a local magistrate. At this juncture, two related events take place that will radically alter Matthew’s future. One is the advent of a murderous predator—popularly known as the Masker—who terrorizes the city. The other is Matthew’s recruitment by the Herrald Agency, an early prototype of the classic private detective agency. Under the auspices of his new employer, Matthew, together with his mentor, Hudson Greathouse, travels to a mental hospital in rural New Jersey, where he meets an unidentified woman known simply as the Queen of Bedlam, a woman who may hold the key to the Masker’s identity.

The Queen of Bedlam is a crime story, of course, and a genuinely enthralling one. More than that, it is a portrait of colonial New York so vibrant and richly detailed that it is almost palpable. The sights, smells, and sounds—the sheer physical reality of that time and place—are drawn with the sure hand of a master storyteller. Supplementing all this is a varied cast of supporting characters who are by turns comic, bizarre, intriguing, endearing, and, in some instances, terrifying. At the center of it all is Matthew Corbett, a gifted young man beginning to discover who—and what—he is meant to become. He is a hero suited to his times, and a fictional creation destined to endure for a very long time to come.

Note: There is no SubPress trade edition of The Queen of Bedlam.

You can pre-order the book from Subterranean Press here.

International editions The Queen of Bedlam

Russian edition of The Queen of Bedlam coming soon